Type in your pickup point and destination of your choice

Receive a text message and email with confirmation.
You can enjoy the journey now!

The most economical and common option for a quick trip is our modern saloon cars. Up to 4 passengers plus 2 sets of hand luggage and 2 suitcases can be easily carried.

A lot of luggage? Choose our Estate cars. Up to 4 passengers with 3 sets of hand luggage and 3 suitcases can be carried. The best airport transfer choice.

You need to hire an 8-seater Minibus for groups larger than 4 people. Up to 8 sets of hand luggage and 8 suitcases can be carried.

Our Executive Minibus’s spacious interior makes any business trip a pleasure. It can carry up to 7 travellers plus 7 suitcases and 7 sets of hand luggage.

The 16-seater minibuses are capable of accommodating the largest groups and up to 8 suitcases and 8 pieces of hand luggage. Choose it if you want your airport transfer or private hire for special events to be comfortable. 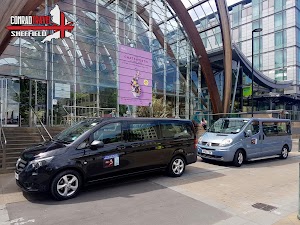 Birmingham is an international airport located in central England, several miles from the city of Birmingham. Due to the convenient location and wide selection of connections, this airport is used by over a dozen million passengers every year. About 50 airlines operate here. From Birmingham, you can fly to most major cities in Europe, as well as Turkey and Morocco. Much of the air traffic is domestic connections – to the cities of Great Britain and nearby Ireland. The airport is also used by residents of slightly further distant cities such as Sheffield. The easiest way to get to Birmingham Airport is by taxi, which will take you no more than 1.5 hours.

Two passenger terminals, one freight terminal, large shopping arcade, millions of passengers and dozens of different destinations – all this makes Birmingham Airport one of the top ten largest airports in the United Kingdom. It is easy to get there thanks to the M1, M5 and M6 motorways, as well as the A45 trunk road. The airport serves not only the entire metropolis of Birmingham but also residents of other cities, including Sheffield. Birmingham International Airport is an attractive departure point to all of central England.

What is the distance between Sheffield and Birmingham? It’s about 87 miles, which is the fastest to travel by car. ConradTravel provides efficient and safe airport transfers with cars of renowned brands such as Renault, Mercedes or Volkswagen. Thanks to the diverse vehicle fleet, we offer transport for individual clients as well as families and larger groups. We support corporate retreats, business trips, as well as typical tourist trips.

Want to get from Sheffield to London? From Birmingham Airport you can fly not only to the capital but also to many other cities in the United Kingdom. Aberdeen, Belfast, Edinburgh, Glasgow and Jersey are just some of them. Many flights connect Birmingham with tourist destinations in France, Spain, Greece and Italy. From here you can also easily reach German cities such as Berlin, Hamburg, Hanover and Düsseldorf. Destinations further away include Dubai, Agadir or Antalya.

Getting to Birmingham Airport is not complicated. Both the airport bus and the train run here. Several regional bus lines bring passengers from nearby cities such as Coventry, Erdington and Nuneaton, and of course Birmingham. By train, the easiest way is to get to Birmingham New Street station – the largest station in the city. From here you can get by rail directly to the airport.

Directly in front of the airport terminals are taxi ranks, which are undoubtedly the most convenient means of transport to the airport. It is worth choosing a taxi instead of the airport bus – the cost of such a transfer is not high at all, especially if you split it among several people. Safety, comfort of travel and guarantee of getting on time are other advantages of this solution. Thanks to a taxi, passengers travelling to Birmingham Airport from Sheffield and surrounding areas can avoid uncomfortable transfers and the stress of possible public transport delays.

Birmingham Airport is equipped with modern infrastructure, including parking lots for people arriving at the airport by car. We can use both short- and long-term parking lots, the latter are, however, distant from the airport and located on the A45 route. Also, the cost of airport parking is significant and often exceeds the price of a taxi transfer. Therefore, it is worth considering using the services of an experienced transport company that will ensure stress-free delivery to the airport.

At the airport, there are information points, bars, restaurants and cafes, exchange offices and ATMs, as well as duty-free shops. There are also rooms for mothers with children and a medical centre as well as facilities for the disabled. You can buy there, among others, perfumes, cosmetics, jewellery and luxury accessories at attractive prices. Several Lounge areas have been prepared for the most demanding travellers.